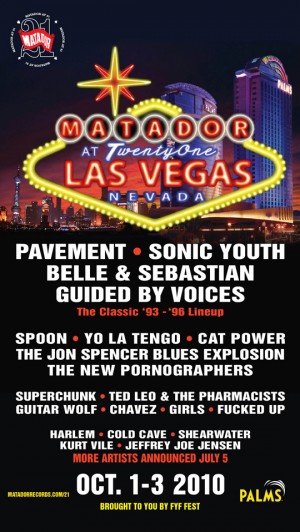 Alt-rock–reunion watchers, you can check off yet another big name: The so-called “classic lineup” of Guided By Voices has announced that it will perform at a celebration for Matador Records.

GBV will join an ever-growing list of cultish bands to have gotten back together in recent years — including Pavement, who will also perform at the event, to be held October 1-3 at the Palms Casino and Resort in Las Vegas, Nevada.

Further notables on the impressive bill include Sonic Youth, Spoon, Superchunk, Belle & Sebastian, Chavez, and the original lineup of Come. The full list of participating bands will be announced soon by the New York City–based label, which is putting tickets on sale on Friday, July 9.

Other influential bands to reunite in recent years include the Pixies, Soundgarden, Slint, My Bloody Valentine, and Dinosaur Jr.

The musicians involved in the GBV reunion will be chief songwriter and lead singer Robert Pollard, guitarists Mitch Mitchell and Tobin Sprout, drummer Kevin Fennell, and bassist Greg Demos — not Dan Toohey, as has previously been reported. The five — who haven’t performed together in 14 years — were largely responsible for the landmark 1995 album Alien Lanes, Guided By Voices’ first on Matador.

Billboard reports that a fall tour will be announced soon.

Should your memory need jogging, a video from 1996 featuring all five musicians involved with the 2010 Guided By Voices reunion is below. And here is footage of Pollard performing more recently.