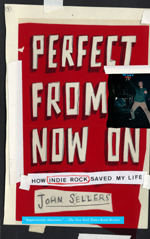 FROM THE BACK COVER

John Sellers was powerless to resist the call of indie rock—once he finally heard it. In this hilarious and revealing memoir, Sellers meticulously charts his transformation from a teenage headbanger rebelling against his Dylan-obsessed father to a thirtysomething fixated on the obscure Ohio band Guided By Voices. Along the way, he commemorates the deaths of Ian Curtis and Kurt Cobain, makes a pilgrimage inspired by the Smiths, and riffs on Pavement and the other raucous bands that have ruled college radio since the 1980s. Packed with compulsively constructed lists, ridiculous formulas, and embarrassing confessions, this is a book for anybody who thinks that corporate rock still sucks.

WHAT BIG SHOTS ARE SAYING ABOUT IT

“Shakespeare may have taught us how to be human, but pop culture taught Sellers how to smash every barrel and move on to the next level.”
—John Hodgman, author of The Areas of My Expertise

“Perfect From Now On is clever and interesting and sincere, and I completely disagree with everything the author says.”
—Chuck Klosterman, author of Sex, Drugs, & Cocoa Puffs

“Sellers works in the approved style of post-gonzo rock journalism, with an arch, self-deprecating, emphatic tone. His knowledge of the subject is impressively obsessive.”—The New York Times

“Music snobbery at its most cheerily self-mocking, written in a highly charged style that goes down easy.”—NPR.org

“A refreshingly accessible memoir from an unapologetic fanboy who (amazingly) avoids making you want to punch his lights out.” —Maxim